Richard Rogers, Amanda Levete, Alan Yentob and Ricky Burdett attracted a full house at the LSE as they reflected on Rogers’ new book and architectural work more generally. Rogers autobiographically reflected on the influence of his birth city, Florence, and its striking piazzas.

These public spaces around developments can play just as an important role in making the development a success for locals, inhabitants and the public as the building itself. This refreshing view is cemented by Rogers’ defining Centre Pompidou project, which created a new public space in Paris and has paved the way for a major rethink of the design of museums and their immediate environs.

Well-designed public realm is by no means an afterthought in our development projects, and the way that people can move through and around the public realm is often the decisive factor in the success of a project. This is an approach which Amanda Levete’s practice, AL_A, has embraced in recent projects such as at the Victoria and Albert Museum and the MAAT in Lisbon. 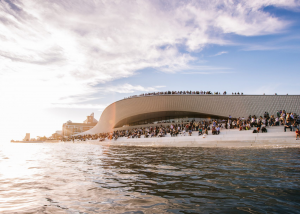 With a shared desire to design public realm spaces that are both stunning and functional, our team of designers, engineers and planners have become renown for their consistent ability to create attractive shared spaces. At Number 1 Leadenhall, we conducted extensive pedestrian modelling and used a trip assignment model using GIS to maximise the efficiency and attractiveness of the public realm surrounding the development. Designing spaces for people is at the core of our approach to transport planning. As a planner here at Momentum I look forward to seeing how the likes of Richard Rogers, Amanda Levete, Alan Yentob and Ricky Burdett will continue to transform the landscapes of our complex cities.